“One day changes Jody’s life forever. She has shut herself down, haunted by her memories and unable to trust anyone. But then she meets Abe, the perfect stranger next door and suddenly life seems full of possibility and hope.

One day changes Mags’s life forever. After years of estrangement from her family, Mags receives a shocking phone call. Her brother Abe is in hospital and no-one knows what happened to him. She meets his fiancé Jody, and gradually pieces together the ruins of the life she left behind. But the pieces don’t quite seem to fit…

Packed with twists and turns, this gripping psychological thriller will make you question whether we can ever really trust the ones we love.“

Hello and welcome bookish friend to damppebbles. Today I am delighted to be sharing my seventeenth 20 Books of Summer review with you, which is for Tattletale by Sarah J. Naughton. Tattletale was published by Trapeze Books on 21st September 2017 and is available in all formats. I chose to read and review an eARC of Tattletale but that has in no way influenced my review.

So this book was a whole lot darker than I ever expected it to be! I like to read fiction that errs on the dark side but with this book, I had to put it down and take a break a couple of times. It’s a great book and I enjoyed reading it, but it got under my skin. The way the best fiction does.

Mags returns to the UK following her brother’s horrific accident. He’s on life support and she’s been told to prepare for the worst. She goes to the hospital, meets her brother’s devastated fiancee for the first time and tries to come to terms with what has happened. Mags and Abe were never close as children. More like rivals really, out to get the other in trouble as much as possible with their controlling and aggressive father. The divide between the siblings seems too wide now though, and Mags wants to change that before it’s too late. So she moves into Abe’s flat, spends time with Jody, his fiancee, and starts to discover things she never knew about her brother. But not everything fits. Not everyone is telling Mags the truth. Then she discovers something which makes no sense at all. Who is lying to Mags and why…?

The chapters are broken down into sections and told from one of four perspectives; Jody – Abe’s fiancee, Mags, Mira – a neighbour, and an unknown young female narrator whose chapters are harrowing and difficult at times to read. This is probably the most appropriate point in my review to do something I don’t normally do, and that’s issue a warning. This book contains some very distressing scenes of sexual abuse and rape against children. For that reason, it’s not going to be for everyone.

The plot doesn’t stop moving from the moment you open the book and I was immediately sucked into the story. The opening packs a punch with its vivid imagery and intriguing characters. There’s a feeling though that you, as the reader, aren’t party to everything that’s going on, or gone on before. You’re missing…..’something’, but what is it? It’s a very intriguing start and the book had its hooks in me from then on. The wonderful sense of impending doom helped as well. I do love a sense of foreboding!

There isn’t a lot I can say about the characters without putting my foot in it so I won’t go into detail. But I will say, I couldn’t decide if I liked or loathed Mags. Mags is the character we spend the most time with and at times I think it may have been a bit of both. She was quite judgmental and superior for a large proportion of the book, which riled me. She rubbed me up the wrong way and I don’t think there was any going back from that point.

Would I recommend this book? I would yes, But please heed my warning about the abuse if that’s something you like to avoid in your fiction. It has its place in this novel but it’s a tough read. Tattletale is a multi-layered, intense read for fans of the psychological suspense genre and one I enjoyed. I did find the ending a smidge far-fetched but as I always say, if you can’t stretch the limits a little in fiction, when can you? I also saw one of the twists coming but that didn’t diminish my enjoyment of this book as there were plenty more twists and turns coming my way that did surprise me. Recommended.

I chose to read and review an eARC of Tattletale. The above review is my own unbiased opinion.

Tattletale by Sarah J. Naughton was published in the UK by Trapeze Books on 21st September 2017 and is available in hardcover, paperback, audio and digital formats (please note, the following links are affiliate links which means I receive a small percentage of the purchase price at no extra cost to you): | amazon.co.uk | Waterstones | Foyles | Book Depository | Goodreads | 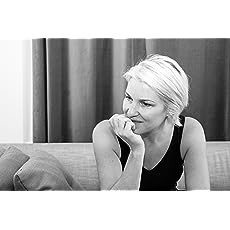 Sarah Naughton’s debut novel, The Hanged Man Rises, was shortlisted for the Costa children’s award. It was followed by a second young adult thriller, The Blood List. Her thrillers for adults, Tattletale and The Other Couple (Orion) are Amazon bestsellers. Sarah lives in London with her husband and sons.