“You can’t see them. But they can see you.

This forest isn’t charted on any map. Every car breaks down at its treeline. Mina’s is no different. Left stranded, she is forced into the dark woodland only to find a woman shouting, urging Mina to run to a concrete bunker. As the door slams behind her, the building is besieged by screams.

Mina finds herself in a room with a wall of glass, and an electric light that activates at nightfall, when the Watchers come above ground. These creatures emerge to observe their captive humans and terrible things happen to anyone who doesn’t reach the bunker in time.

Afraid and trapped among strangers, Mina is desperate for answers. Who are the Watchers and why are these creatures keeping them imprisoned, keen to watch their every move?”

Hello and welcome to damppebbles. Today I am delighted to share my review of The Watchers by A.M. Shine. The Watchers was published by Aries Fiction on 12th May 2022 and is available in all formats. I was very keen to read this book. So much so that I made it part of two different reading challenges to ensure I got to it – 12 Books in 12 Months and 20 Books of Summer 2022. The Watchers is the fifth book I’ve read as part of 12 books and the eighth book I’ve read as part of 20 books of Summer 2022 (yes, I am very behind with 20 books this year! 😬).

When Mina is promised a couple of hundred euro by a bloke in the pub for delivering a Golden Conure to a collector in Connemara, she finds it hard to refuse. But the promised easy drive, along with the draw of easy money starts to look a lot like hard work when her car breaks down at the edge of a forest. Armed with the bird and little else, Mina sets out to find a mechanic to get her back on the road. The first person she sees however is a woman who screams at her to take shelter. Because this forest isn’t on any map and all cars that approach the area break down at the treeline. The woods and the night belong to the watchers. And now so does Mina….

The Watchers is a beautifully written horror novel which will send shivers down your spine and make you think twice before turning the light out. With shades of the epic Bird Box, this creepy and claustrophobic story gets under the readers skin. Mina and her fellow captives are watched like animals in a zoo on a nightly basis. They’re starved of sleep by the ever present light which remains on during the hours of darkness, whilst being subjected to the most terrifying screams as the creatures try to scratch and claw their way through the glass wall. Escape from the creatures is impossible. The trek out of the forest too vast to conquer within the hours of daylight. The risk of failure too terrifying to contemplate. The tension is perfectly pitched, the eeriness is sublimely written and the sense of desperation from the characters was palpable.

Would I recommend this book? I would, yes. The Watchers is a beautifully written classic horror novel with a gothic feel and poetic prose which I thoroughly enjoyed. I loved the tension, the suspense and how utterly unnerving I found the story. I was drawn to this book thanks to several factors. Two of the main reasons being the gorgeous cover and the incredible reviews from fellow bloggers and reviewers. The hype is real. A stunning, creepy setting, eerie creatures to make your skin crawl, superb characters who the reader really gets the measure of. And a shocking, well-penned twist which left me reeling. It’s a stunning debut from an author to watch and I cannot wait to get my mitts on a copy of the author’s next book, The Creeper, when it publishes in September.

The Watchers by A.M. Shine was published in the UK by Aries Fiction on 12th May 2022 and is available in hardcover, paperback, audio and digital formats (please note, the following links are affiliate links which means I receive a small percentage of the purchase price at no extra cost to you): | amazon.co.uk | Waterstones | Foyles | Book Depository | bookshop.org | Goodreads | damppebbles bookshop.org shop | 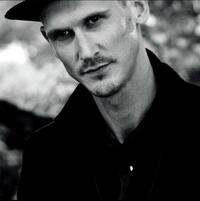 A. M. Shine is an author of Literary Horror from the west of Ireland. It was there that at a young age he discovered a passion for classic horror stories, and where he received his Masters in history, before ultimately sharpening his quill to pursue a life devoted to all things literary and macabre. His writing is inspired by the trinity of horror, history, and superstition, and he has tormented, toyed with, and tortured more characters than he will ever confess to.

Owing to a fascination with the works of Edgar Allan Poe and his ilk, A. M. Shine’s earlier writings were Gothic in their style and imagination. When his focus turned to novels he refined his craft as an author of Irish horror – stories influenced by his country’s culture, landscape, and language, but which draw their dark atmosphere and eloquence from the Gothic canon of his past.