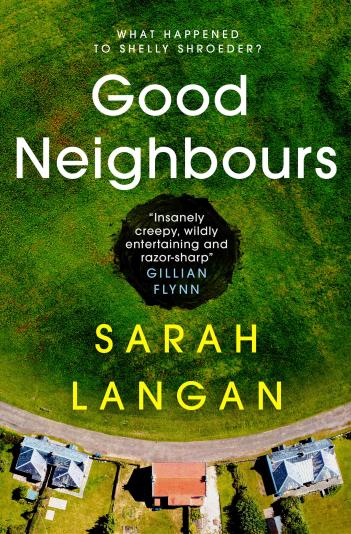 “A sudden tragedy pits neighbour against neighbour and puts one family in terrible danger.“

Welcome to Maple Street, a picture-perfect slice of suburban Long Island, its residents bound by their children, their work, and their illusion of safety in a rapidly changing world. But when the Wilde family moves in, they trigger their neighbours’ worst fears. Arlo and Gertie and their weird kids don’t fit with the way Maple Street sees itself. As tensions mount, a sinkhole opens in a nearby park, and neighbourhood Queen Bee Rhea’s daughter Shelly falls inside. The search for Shelly brings a shocking accusation against the Wildes. Suddenly, it is one mother’s word against the other’s in a court of public opinion that can end only in blood.

A riveting and ruthless portrayal of suburbia, Good Neighbours excavates the perils and betrayals of motherhood and friendships and the dangerous clash between social hierarchy, childhood trauma, and fear.”

Hello and welcome to damppebbles. Today I am delighted to be joining the Good Neighbours blog tour. Good Neighbours by Sarah Langan was published by Titan Books on 13th July 2021 and is available in paperback and digital formats.

First up for you today I have an interview with Sarah Langan, followed by my review of this fabulous book.

Hello Sarah, welcome to damppebbles. First of all, please can you tell us about Good Neighbours

Hi! Good Neighbours is about a misfit family who scrimp for years to buy the most run-down house on a suburban cul-de-sac – a piece of the American Dream. But they’re greeted with hostility, and when a sinkhole opens in the middle of the block, a vicious neighbour spreads a rumour about them. The rumour’s so awful that the rest of the neighbours feel obliged to believe it, in order to protect their children. They become a mob, and by the end, an entire family is murdered in cold blood. Good Neighbours is the story of what happened, and why.

What three words would you use to describe Good Neighbours?

Which character was the most challenging to write? I really felt for the entire Wilde family – my heart broke for them as the situation spiralled out of control.

Rhea Schroeder, the alpha dog next door neighbour, was the most challenging character. I sympathize with her, but her thoughts get so incredibly ugly. It was hard to inhabit her, when writing those moments.

Where do you find inspiration for your books?

I think about the world, and current events, and I try to distil those things into a simpler metaphor. So, the radicalization of America is represented by a small cul-de-sac in Good Neighbours.

If Good Neighbours was made into a movie, which famous actors would play Gertie and Rhea? Have you cast any of the other characters in your mind?

We’ve now got a wonderful person attached to play Rhea and also produce, and I’ve very, very excited. We’re incredibly lucky to have her, and I wish I could brag about it!

As for the rest of the cast, what matters to me is that the actors engage with the role. I’d hate to narrow my options by naming anyone, specifically. I feel like it ought to be open – I’d love to be surprised.

*This is all if it happens. But maybe it’ll happen!

Which band would you choose to headline the soundtrack for the movie adaptation?

I’m so hopelessly out of touch that this is another one I should probably leave to someone more qualified. But I like David Bowie, Karen O, and Tobacco.

Who is your writing hero?

I love Megan Abbot, Jennifer Egan, EM Forester, and Somerset Maugham. I love work that is both unflinching and humane.

Which book do you always recommend to fellow readers/writers?

What advice would you give to someone considering taking the plunge and attempting to write their first novel?

Don’t worry if you have no idea what you’re doing. None of us have any idea. Just write it.

If you could have a dinner party and invite three other writers (living or dead), who would you invite?

Jane Austen, Mary Shelly, and Edith Wharton. I’d be fascinated to see if and how they got along. And also, just utterly fascinated.

I’d be utterly amazed, too, if every woman represented in Judy Chicago’s Feminist Dinner (an exhibit at the Brooklyn Museum https://www.brooklynmuseum.org/exhibitions/dinner_party) suddenly appeared at the table.

What’s the one question you wish I had asked and what’s the answer?

I had Greek yogurt and pancakes for breakfast. I’m endlessly quitting coffee and then drinking it again. It’s a vicious cycle. My kids have been home from school for more than 400 days. I feel like I’ve been living in a cave since quarantine started. It’s making me a little slap-happy, and I really hope things get better soon.

Thank you so much for joining me today, Sarah. Read on to find out what I thought about Good Neighbours.

I chose to read and review a free ARC of Good Neighbours but that has in no way influenced my review. My grateful thanks to Sarah at Titan Books for sending me an early copy and inviting me to join the tour.

I absolutely loved Good Neighbours. From the moment I saw the cover and read the blurb, I knew I had to read this book. Sometimes you just know, right? This is one of those books which called to me and I couldn’t wait to dive in. So much so, I started reading it the day it landed on the doormat! And from that point forward, I really struggled to put it down.

The Wilde family are new to Maple Street, Long Island. Gertie’s dreams of a settled suburban life are finally coming true. But the residents of Maple Street aren’t so keen on the new arrivals. They don’t quite ‘fit’ in their picture-perfect neighbourhood. Still, ex-beauty pageant queen, Gertie does her best to make it work for her and her family. She befriends top dog, Rhea Shroeder, and starts to feel settled. Life is finally good for the Wildes. That is until a sinkhole appears in the park opposite the close-knit community’s street and Rhea’s daughter, Shelly, falls in. Suddenly there’s a reason to blame the newcomers. The shocking news of Shelly’s disappearance opens the floodgates and before long, accusations are flying. Neighbour turns on neighbour. Friend on friend. As the hatred for the Wilde’s escalates, it’s down to Gertie to prove that not everything is as rosy as it may first appear in paradise…

Good Neighbours is a deliciously dark, visceral tale of suburbia which I devoured with utter glee. It’s so beautifully sinister, so packed full of menace, it was impossible to tear myself away from it. I was fully immersed in the drama of Maple Street and it’s living, breathing characters. I was sat on their shoulders watching, as step by step, the situation spiralled out of control. To the point where I had to put the book down a couple of times as the impending sense of dread and despair built, just to catch my breath and to prolong the inevitable. My heart was 100% with the Wilde family and I couldn’t see them getting out of this unscathed, if at all. And that very nearly broke me.

The story is set in 2027 and the reader watches as things slowly but surely fall apart for the Wildes. One accusation made in the heat of the moment, one word said in pure anger and frustration, one word meant to hurt and cause the deepest of wounds, begins the street’s campaign of unrelenting, unjustified hate. I was swept up into the story and completely mesmerised by what was taking place on the page in front of me. I loved it! In amongst the day to day drama of Maple Street in 2027, there are newspaper reports dated 10 years later which give the reader extra detail, along with snippets from a book where some of the neighbours get to explain their thinking at the time of the sinkhole. Truths are very much rewritten and memories are altered. Guilt is a funny thing.

Would I recommend this book? I would, yes. Good Neighbours was a hugely enjoyable book which I loved losing myself in. The ending was perfect. The whole darn book was pretty perfect. If you’re a fan of intelligent psychological thrillers with characters who get under your skin, if you love books which make you feel something, then you’ve got to get yourself a copy of Good Neighbours. Absolutely beautifully written, divinely dark and chock full of delicious menace. I’m off to check out Langan’s back list as I can’t wait to read more books by this author. Highly addictive, highly recommended.

I chose to read and review a free ARC of Good Neighbours. The above review is my own unbiased opinion.

Good Neighbours by Sarah Langan was published in the UK by Titan Books on 13th July 2021 and is available in paperback and digital formats (please note, the following links are affiliate links which means I receive a small percentage of the purchase price at no extra cost to you): | amazon.co.uk | Waterstones | Foyles | Book Depository | bookshop.org | Goodreads | damppebbles bookshop.org shop | 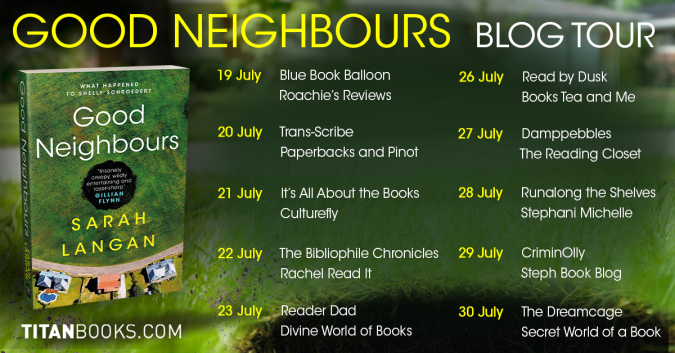 Sarah grew up on Long Island, got her MFA in creative writing from Columbia University, her MS in environmental toxicology from NYU, and currently lives in Los Angeles with her family and house rabbit.

Her next novel GOOD NEIGHBORS is out now. 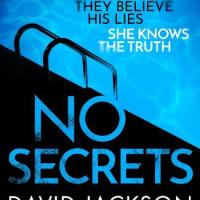