Jane and Marnie have been inseparable since they were eleven years old. They have a lot in common. In their early twenties they both fell in love and married handsome young men.

But Jane never liked Marnie’s husband. He was always so loud and obnoxious, so much larger than life. Which is rather ironic now, of course.

Because if Jane had been honest – if she hadn’t lied – then perhaps her best friend’s husband might still be alive . . .

This is Jane’s opportunity to tell the truth, the question is:
Do you believe her?“

Hello and welcome to damppebbles. Today I am delighted to share my review of Seven Lies by Elizabeth Kay. Seven Lies was published by Sphere Books on 1st October 2020 and is available in all formats.

Seven Lies first came onto my radar thanks to a crime fiction festival in 2019. I was given a pamphlet which contained the first chapter. I have to admit, I didn’t read it. I’m peculiar in that way – it’s the whole book or nothing at all (surely I can’t be the only one!?). But the cover artwork, the enthusiasm of the publicist and the synopsis of the story stayed with me. So I downloaded a copy as soon as it was published digitally.

Marnie and Jane have been friends forever. Well, since they met at school at the age of 11 but it feels like forever. The bond the girls have is strong, unbreakable, and throughout their teens and into their twenties, they stay firm friends. Both marrying the men of their dreams, the future looks bright. Until it isn’t. Jane has never really liked Marnie’s husband, Charlie. He’s overbearing and unpleasant and a terrible match for Marnie in Jane’s eyes. So when an opportunity arises to change the women’s future, to reignite the close bond they had in school, Jane takes it….

Seven Lies is the slow unravelling of a deeply flawed character which I found compulsive reading. Jane, as we know before we’ve even cracked the cover of this book, is a terrible liar so the reader is immediately on their guard. However, many of the lies, we discover, as they’re drip-fed to us, are so small, so inconsequential that you wonder what harm they could really do? Some are told to save from hurt feelings, some are more targeted. The book is narrated by Jane in a confessional style which hooked me in from the start. I wanted to know who she was speaking to. Who was hearing this outpouring of deceit and what was Jane hoping to achieve by sharing? The reader doesn’t discover who is on the other side of the confessional screen until towards the end of the book but for me, it was quite a shocker. In both choice of character and the intent *shudder*.

I found myself flipping between feeling sorry for Jane, at the tragedy of her own life, and being repulsed by her unhealthy obsession with Marnie, which at times made my skin crawl. She was mesmerising in her madness and I couldn’t tear myself away from her story. I couldn’t decide if the obsessive side of her personality was always present or if grief had driven her to look at things in a different light. There are moments throughout Jane’s story where she doesn’t seem all that concerned about Marnie, but these moments tended to involve her own husband, Jonathan, so my feeling is that grief was the catalyst to her unravelling.

Would I recommend this book? I would, yes. Seven Lies is a beautifully written debut with a destructive friendship at its heart. I was pulled into the life of Jane and Marnie and watched as things went from bad to worse for the pair. If you’re looking for a compulsive character driven tale of obsession and control then you’ll want to give Seven Lies a read. Recommended.

Seven Lies by Elizabeth Kay was published in the UK by Sphere on 1st October 2020 and is available in hardcover, paperback, audio and digital formats (please note, the following links are affiliate links which means I receive a small percentage of the purchase price at no extra cost to you): | amazon.co.uk | Waterstones | Foyles | Book Depository | bookshop.org | Goodreads | damppebbles bookshop.org shop | 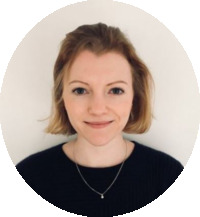 Elizabeth Kay started her career as an assistant at Penguin Random House. She is now a senior commissioning editor there and is simultaneously pursuing her passion for writing.

She won first prize – in a short story competition judged by Jacqueline Wilson – aged eight, and has been writing ever since. She lives in London and has a first-class degree in English literature.