“Five students walk into detention. Only four come out alive.

Sports star Cooper only knows what he’s doing in the baseball diamond.

Bad boy Nate is one misstep away from a life of crime.

Prom queen Addy is holding together the cracks in her perfect life.

And outsider Simon, creator of the notorious gossip app at Bayview High, won’t ever talk about any of them again.

He dies 24 hours before he could post their deepest secrets online. Investigators conclude it’s no accident. All of them are suspects.

Everyone has secrets, right?
What really matters is how far you’ll go to protect them.”

Five teenagers from all walks of high school life end up in detention together. By the time detention is over, one of the teens has died. The circumstances look suspicious, particularly as the victim was about to reveal a devastating secret about each of his fellow students via his hugely popular gossip app. The police have their motive, now all they need to do is find the killer…

This book is HUGE! You’ve probably already heard about it, perhaps you’ve already read it or watched the Netflix series. I’ve had it sitting on my shelf for a short while now so decided to take the plunge and see if it’s as good as everyone says it is, see if the hype is real. Oh boy, the hype IS REAL! One of Us Is Lying is a cleverly written, YA mystery which I devoured in a few short sittings. With a cast of well-drawn characters (albeit a little stereotypical) and an intriguing, very compelling mystery at the heart of the novel, I was drawn into life at Bayview High and the mystery surrounding Simon’s death.

We get to hear from all four of the suspects – Nate, Addy, Bronwyn and Cooper – and see the story evolve from their perspectives. I thought the author did a fantastic job of showing how events affected the teens and how their lives changed, being at the centre of a murder investigation. The characters do all start out a little obvious, a little clichéd (the bad boy, the prom queen, the nerd and the jock) but by the end they’ve all morphed into much more interesting and multi-layered characters.  As I approached the end of the book I was sure I had reached the correct conclusion and worked out ‘whodunit’, only to be proved wrong. I was ‘sort of’ right but also ‘sort of’ wrong too 🤪

Would I recommend this book? I would, yes. One of Us Is Lying is a fantastic debut and I’m excited to already have the follow-up, One of Us Is Next, on the shelf ready to be picked up at the earliest opportunity. One of Us Is Lying is a well-written, cleverly plotted YA mystery which I think will appeal to all mystery fans no matter what your age. I thoroughly enjoyed this book, it’s easy to read and I found it to be quite the page-turner.  All in all, a very enjoyable debut which deserves the attention it’s received. Recommended.

I chose to read and review a free ARC of One of Us Is Lying. The above review is my own unbiased opinion.

One of Us Is Lying by Karen M. McManus was published in the UK by Penguin Books on 1st June 2017 and is available in hardcover, paperback, audio and digital formats (please note, the following links are affiliate links which means I receive a small percentage of the purchase price at no extra cost to you): | amazon.co.uk | Waterstones | Foyles | Book Depository | bookshop.org | Goodreads | damppebbles bookshop.org shop | 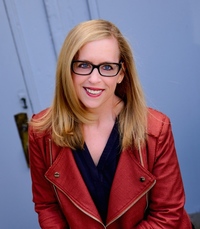 Karen M. McManus is a #1 New York Times, USA Today, and international bestselling author of young adult thrillers. Her work includes the One of Us Is Lying series, which has been turned into a television show on Peacock and Netflix, as well as the standalone novels Two Can Keep a Secret, The Cousins, You’ll Be the Death of Me, and Nothing More to Tell. Karen’s critically acclaimed, award-winning books have been translated into more than 40 languages.