“There are dark forces at work in our world (and in Manchester in particular), so thank God The Stranger Times is on hand to report them . . .

A weekly newspaper dedicated to the weird and the wonderful (but mostly the weird), it is the go-to publication for the unexplained and inexplicable.

At least that’s their pitch. The reality is rather less auspicious. Their editor is a drunken, foul-tempered and foul-mouthed husk of a man who thinks little of the publication he edits. His staff are a ragtag group of misfits. And as for the assistant editor . . . well, that job is a revolving door – and it has just revolved to reveal Hannah Willis, who’s got problems of her own.

When tragedy strikes in her first week on the job The Stranger Times is forced to do some serious investigating. What they discover leads to a shocking realisation: some of the stories they’d previously dismissed as nonsense are in fact terrifyingly real. Soon they come face-to-face with darker forces than they could ever have imagined.

The Stranger Times is the first novel from C.K. McDonnell, the pen name of Caimh McDonnell. It combines his distinctive dark wit with his love of the weird and wonderful to deliver a joyous celebration of how truth really can be stranger than fiction.”

Hello and welcome to damppebbles. Today I am handing the blog over to my guest reviewer, Ryan, who is going to share his thoughts on The Stranger Times by C.K. McDonnell. The Stranger Times was published by Transworld Books on 6th January 2022 and is available in hardcover, paperback, audio and digital formats.

Over to Ryan to find out what he thought…

The Stranger Times is the first book in the Stranger Times series by C.K. McDonnell, published in January 2022, the sequel, This Charming Man, has already been published with the third book, Love Will Tear Us Apart, to follow in early 2023.  The Stranger Times is set in Manchester and revolves around the highly dysfunctional workforce of a low circulation newspaper which focuses more on UFOs, ghosts and monster sightings than who is this weeks prime minister!

This initial story centres around Hannah Willis. Recently divorced and looking for a new start in life she applies for a job as assistant editor at a paper she knows very little about.  The characterisation in this novel is absolutely wonderful. Each character is deep, flawed and relatable (although if you relate to the main villain of the piece then it may be time to reconsider things!).  Hannah is a brilliant character with the fatalistic energy of Arthur Dent from the Hitchhikers Guide to the Galaxy. She is thrown into a world so far removed from what she is used to, but somehow adapts to whatever life throws at her.  Her Editor, Vincent Banecroft, is the type of boss that any company with a functional HR Department would have got rid of years ago, but The Stranger Times doesn’t have much that is functional at all. Whether it’s the Editor, journalists or the printing press itself!  Her new colleagues are a mixed bunch – from the irrepressible office manager Grace, who somehow keeps the unmanageable managed, through to the journalists Ox and Reggie. Reporting duo’s are often fictionally portrayed as fearless, intuitive and knowledgeable yet our team are more at home pursuing possessed toilets than investigating real danger on their doorstep.

No newspaper is complete without a major story to pursue and when a friend of the paper meets an untimely demise in suspicious circumstances, the misfits of the Times decide to investigate in their own inimitable way. They don’t trust the police to pursue all lines of enquiry, particularly when that line of enquiry involves ‘facts’ which seem too fantastical to even the most open minded of journalists.

I am delighted that this book is the start of a series, and I can only hope it is more than the three titles already available to us readers! The characters, setting and story were wonderful. An escapist fantasy set in one of the grittiest parts of Manchester.  Wonderful storytelling with laugh out loud moments. McDonnell has set a new benchmark for quality urban fantasy that other authors will be compared to.

Without a doubt I would recommend The Stranger Times to anyone looking for a book that will provide escapism, humour and a great story.  I cannot wait to read This Charming Man and find out more about the characters’ backstories during their new vampire based adventure. Certainly my most enjoyable book of the year and the start of a series that I am so excited about.

The Stranger Times by C.K. McDonnell was published by Transworld Books on 6th January 2022 and is available in hardcover, paperback, audio and digital formats (please note, the following links are affiliate links which means I receive a small percentage of the purchase price at no extra cost to you): | amazon.co.uk | Waterstones | Foyles | Book Depository | bookshop.org | Goodreads | damppebbles bookshop.org shop | damppebbles amazon.co.uk shop | damppebbles amazon.com shop | 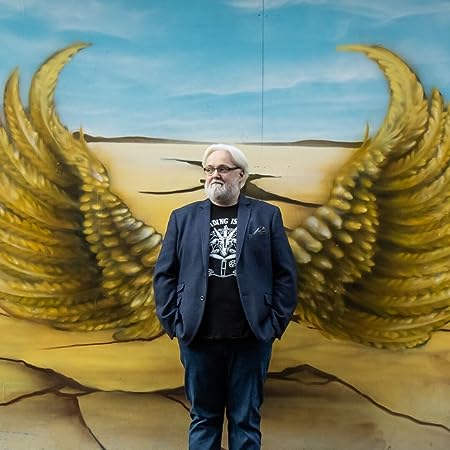 C.K. McDonnell is the paranormal pen name of the Irish bestselling author Caimh McDonnell. Born in Limerick and raised in Dublin, Caimh is a former stand-up comedian and TV writer. He performed all around the world, had several well-received Edinburgh shows and supported acts such as Sarah Millican and Gary Delaney on tour before hanging up his clowning shoes to concentrate on writing. He has also written for numerous TV shows and been nominated for a Kid’s TV BAFTA.

When not writing about the adventures of the staff at The Stranger Times in his adopted home of Manchester, he is the author of the Increasingly Inaccurately titled Dublin Trilogy of books and the various spinoffs, all of which have been Amazon bestsellers on both sides of the Atlantic.

Caimh lives in Manchester with Wonderwife and their two dogs. To find out more about him, visit whitehairedirishman.com, and to find out more about The Stranger Times, and to join the mailing list for updates plus a free short story collection, go to TheStrangerTimes.com.

Also check out The Stranger Times podcast, available almost everywhere, and featuring short stories set in the world of The Stranger Times, written by C.K. and read by some of the finest stand-up comedian talent that are willing to do it for the money.