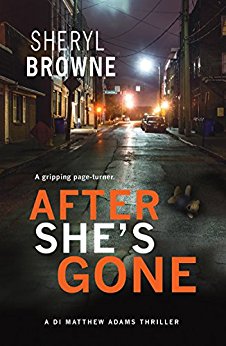 After She’s Gone
“He’s killed your child and kidnapped your wife. What would YOU do?

There’s evil and then there’s Patrick Sullivan. A drug dealer, pimp and murderer, there are no depths to which Patrick would not sink, and Detective Inspector Matthew Adams has found this out in the most devastating way imaginable.

When Patrick’s brother is shot dead in a drug bust gone wrong, the bitter battle between the two men intensifies, and Matthew finds it increasingly difficult to hold the moral high ground. All he wants is to make the pimping scum suffer the way he did … the way Lily did.

But being at war with such a depraved individual means that it’s not just Matthew who’s in danger. Patrick has taken a lot from Matthew, but he hasn’t taken everything – and now he wants everything.” 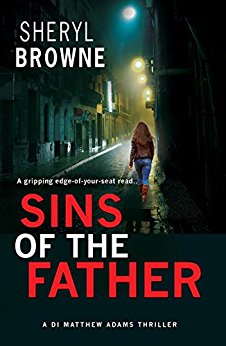 Sins of the Father
“What if you’d been accused of one of the worst crimes imaginable?

Detective Inspector Matthew Adams is slowly picking up the pieces from a case that nearly cost him the lives of his entire family and his own sanity too. On the surface, he seems to be moving on, but he drinks to forget – and when he closes his eyes, the nightmares still come.

But the past is the past – or is it? Because the evil Patrick Sullivan might be out of the picture, but there’s somebody who is just as intent on making Matthew’s life hell, and they’re doing it in the cruelest way possible.

When Matthew finds himself accused of a horrific and violent crime, will his family stand by him? And will he even be around to help when his new enemy goes after them as well?”

I am delighted to be showcasing two terrific crime thriller novels from a truly lovely author today.  Books one and two in Sheryl Browne’s gripping new crime series featuring DI Matthew Adams were both published by Choc Lit last month and are available in eBook format.

Today, in order to tempt you into adding these beauties to your TBR, I have a brilliant extract from the first book in the series, After She’s Gone.  So grab a cuppa and make yourself comfy…

After She’s Gone
‘Not very gentlemanly, keeping ladies hanging around, Adams, is it?’ Patrick watched with interest, as the copper turned a pale shade of white. Reeling on his feet, he was, poor sod. He actually looked as if he might pass out. Didn’t take him long to recover himself, though. Patrick watched on as Adams pulled himself up, bracing his shoulders in that bloody annoying Bruce Willis nothing-gets-to-me way he had. It obviously did though. He might be trying to keep a grip, but the little tic going in his cheek was a dead giveaway. Patrick had noticed it when Adams had paid him a visit in the nick. Seen it many times, when the pathetic little runt had tried to stand up to him as a kid. Most recently, before the bastard had kicked him to the floor like a dog, for which the copper was about to get payback. Oh, yes, his fuse was lit all right. The man was a ticking time bomb, far too reactive to be on the force, in Patrick’s humble opinion.

Patrick barely had time to free himself of the girl before the copper exploded.

‘You fucking animal!’ he seethed, lunging towards him.

But Patrick was ready. ‘Down!’ He levelled the shotgun, ready to blast Adams to kingdom come if he didn’t back off.

Clearly realising he might be at a disadvantage, Adams stopped, his expression pure thunder, his chest heaving. Oh, dear. Was that a little wheeze Patrick could hear in there? Quietly amused, he noted how Adams was struggling to control his breathing, another giveaway as to the copper’s high state of anxiety. Patrick probably knew the signs better than Adams did.

‘I said, down, Adams.’ Lowering the gun, Patrick indicated the floor, which is where he wanted Adams. No one, but no one, constantly refers to Patrick Sullivan as an animal and gets away with it.

‘Unless you want your wife and Snow White to see your blood splattered all over the walls, that is?’

Adams didn’t budge. Taking slow breaths, he stayed exactly where he was, his fist clenched at his side and in his eyes … pure murder. Patrick felt the tiniest flicker of apprehension run through him.

‘We can play the waiting game if you like, Adams.’ He made sure to hold his gaze. ‘But I’m not sure your good lady will be very keen on the idea. Are you?’

Patrick’s gaze flicked in the direction of the man’s wife.

‘Do it,’ he ordered. ‘Face front and get down on your knees, copper, if you value her life.’

‘You bastard.’ Adams took another laboured breath and ran his hands over his face. Then, glancing heavenward, finally, he did as instructed.

Got him, Patrick thought, hugely satisfied that the copper seemed to be getting the message. Patrick had the upper hand now. This time, it would be Adams defenceless on the floor, while he broke his fucking jaw. Quid pro quo, as far as Patrick was concerned.

I hope that’s piqued your interest.  I can’t wait to make a start on these two; everything about them appeals to me!

After She’s Gone and Sins of the Father by Sheryl Browne were published in the UK by Choc Lit in February 2017 and are available in eBook format | amazon.co.uk | amazon.com | Goodreads | 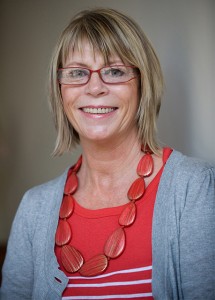 A member of the Crime Writers’ Association, Romantic Novelists’ Association and awarded a Red Ribbon by The Wishing Shelf Book Awards, Sheryl has several books published and two short stories in Birmingham City University anthologies, where she completed her MA in Creative Writing.

Recommended to the publisher by the WH Smith Travel fiction buyer, Sheryl’s contemporary fiction comes to you from multi-award winning Choc Lit.