Do you like a book with a gripping story? A page-turner you can’t put down? A book with believable characters, a twisty yet credible plot and an easy-to-read pace? If that’s you, then this thriller set in Dublin should be right up your street.

“University Lecturer David Ryan is having an affair. And he thinks no-one knows.

He’s wrong. Someone does know. And that someone is out to blackmail him.

But when the blackmail attempt goes wrong, both Ryan and the blackmailer find themselves dragged into an underground (and decidedly seedy) world of secrets, lies and violence. A world where no-one can be trusted and everyone has something to hide.

Set in modern-day Dublin, ‘After the Affair’ is the unputdownable debut thriller from author Jonathan Kaye.”

I am absolutely delighted to welcome you to my stop on the After the Affair blog tour. My thanks to Helen at baattyaboutbooks for asking me to be involved.  After the Affair is author Jonathan Kaye’s debut novel and I, for one, am extremely excited to read it.  So far the reviews from fellow book bloggers and reviewers have been fantastic and they know what they’re talking about, let me tell you!

In celebration of this rather wonderful blog tour I have a fantastic booky focussed guest post from Jonathan Kaye to share with you today (I do love a guest post!).  So without further ado, I’ll hand over to Jonathan…

A Blast from the Past

Anyway, with my cash-flow limitations being what they were, my evenings were rather, well, free I guess you might say. The whole notion of going out to a pub or a restaurant or a cinema was something neither I nor my bank balance could countenance with a straight face. Indeed, if I even attempted to slot my cash-card into an ATM to check my funds, the machine would just spit it back out and ‘LOL’ would appear on the screen.

I worked in ‘The Works’ for £3.70 an hour. (Showing my age now, I know!!) Surrounded by books, stationery and, I have to say, amazing people. Oh, and occasionally very odd customers. “Do you sell cigarettes?” “Do you cut keys?” “Can I have two cornettos and a chocolate magnum please?” One’s best option was to smile, shake one’s head and say ‘No, I’m sorry.’ (Though I never quite understood why I was the one who ended up apologising for their obvious lack of brain equipment – but hey, I learned to let it go!)

I remember in particular the run up to Christmas being an epic, almost impossible, task. My colleagues and I were like a team of antarctic explorers with depleted food stocks and insufficient protection from the elements, battling the constant blizzard of last minute shoppers to reach our longed for destination of the South Pole – or 6pm Christmas Eve as we called it. Seriously, Shackleton, Scott and Crean had nothing on us. And when we made it to our Christmas Eve destination, we collapsed, exhausted but joyous, ready to celebrate our one single day of freedom before the Sales brought our respite to an abrupt and anti-climactic end. Oh retail joy, how I don’t miss you!

(It was in Milton Keynes by the way. And I know for a fact that the manager I worked for is still there. She’s a wonderful person so if you do happen to pop in to that particular store, tell her JK says hello – and when she looks at you blankly, just say the lanky Irish bloke who worked here in the mid-nineties…)

Anyway, where was I? Oh yes, evenings. My evenings were never going to amount to much in a social sense. To be honest, even if I’d wanted to go somewhere in my very nice car I’d hardly have managed to stump up for the fuel – which I soon realised rendered the concept of having a nice car rather pointless, but that’s a conversation for another day. Instead, my evenings (and remember we’re talking pre-internet here, pre-facebook, wow, imagine!) meant I had plenty of time on my hands. So I used that time to read. Yep, I read. A lot. An awful lot. I treated the bookshop like my own personal library. Now, don’t worry, I never damaged a single spine or marked a single page. In fact, I was so stealthy in my reading habits that no unsuspecting customer would ever have questioned the assumed virginity of their newly acquired book even after my grubby paws had been all over it. (Ugh, I’ll change that sentence before I share this piece on-line don’t worry ….. Ooops, too late!)

I devoured books, lots and lots and lots of books. But to this day, more that 20 years later, one particular novel still sticks in my mind. It was probably the first book I read where I experienced that ‘OMG sweet suffering jeeeeebers’ feeling as I turned the last few pages and found out what the previous few hundred had been leading up to. It was called ‘The Day After Tomorrow’ by Alan Folsom. Published in 1994 I think. And it was an epic read!

So if you like an good page-turning thriller and you’ve never read it, grab yourself a copy. You won’t be disappointed. Y’know, now that I think about it, I might even read it again myself sometime!

OK, I admit it.  I actually spat my tea out all over the keyboard when Jonathan mentioned using The Works as his own personal library.  Absolutely brilliant.  And how many UK based book fanatics haven’t dreamt of doing that at one time or another…?  Hmmm…? My thanks to Jonathan Kaye for such a humourous and interesting guest post.  And of course for the book recommendation!

After the Affair by Jonathan Kaye was published in the UK on 6th November 2016 and is available in eBook format | amazon.co.uk | amazon.com | Goodreads | 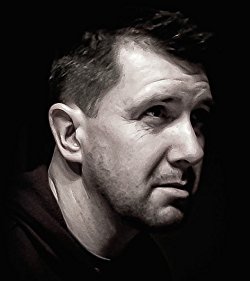 Jonathan Kaye is a stay-at-home dad who decided to write a thriller when his son started school. The house was tidy by ten every morning so what else was he gonna do till, like, three? Apart from drink coffee with moms – which he is very good at by the way.

It took him a while to figure out the plot. He even had to use google to find out what policemen and judges and people like that did. Characters were easier. He just based one of them on himself and all the others on people he knew. Seriously it’s what all writers do. Why do you think Stephen King’s protagonist is invariably a novelist?

Finally, he’s sitting here now wondering why he’s writing about himself in the third person. It is making him feel important and aloof though!

12 thoughts on “#BlogTour | #GuestPost: After the Affair by Jonathan Kaye (@JonathanKaye000) @baattyabtbooks”