“The latest sophisticated, suspenseful, and intensely human spy thriller from master of the genre Dan Fesperman transports the reader to Paris and Hamburg, and deep into the conspiracy behind the 9/11 attacks.

Paris, October 1999. CIA agent Claire Saylor’s career has stalled, thanks to unorthodox behaviour in her past. So when she’s told she’ll be going undercover in Hamburg to pose as the wife of an academic who has published a controversial interpretation of the Quran’s promise to martyrs, she assumes the job is a punishment. But when she discovers her team leader is Paul Bridger, another Agency maverick, she realizes there may be more to this mission than meets the eye – and not just for professional reasons.

Meanwhile, Mahmoud, a recent Moroccan émigré in Hamburg, has become involved with a group of radicals at his local mosque. The deeper he’s drawn into the group, the more he is torn between his obligations to them and his feelings toward a beautiful westernized Muslim woman.

As Claire learns the truth about her mission, and Mahmoud grows closer to the radicals, their paths are on a collision course that could have disastrous repercussions far beyond the CIA.”

Hello and a very warm welcome to damppebbles. Today I am joining the blog tour for The Cover Wife by Dan Fesperman and sharing an extract from the book. The Cover Wife was published by Head of Zeus on 6th July 2021 and is available in hardcover, audio and digital formats with the paperback to follow in 2022. My grateful thanks to Sophie and Sofia at Midas PR for my blog tour invitation.

Put the kettle on, put your feet up and enjoy a snippet from this gripping spy thriller…

As directed, Claire proceeded down a hallway to a room where someone had written “Training Session” in block letters in French on a sheet taped to the door. She knocked twice, already feeling a twinge of guilt. Despite her distaste for these sorts of gatherings, she knew she’d be embarrassed if the door were to open onto a roomful of waiting participants. She had already spent far too much of her professional life seated before men who habitually checked their watches.

A male voice, vaguely familiar, called out from inside.

She opened the door. The only occupant was seated with his back to her at a small table, next to a single empty chair. He wore chinos and a wrinkled black blazer. Like his voice, something about the shape of his head was familiar. The walls were bare except for a thermostat, a fire safety notice, and a closed door on the far side of the room. As if oblivious to her entry, the man scribbled on a legal pad, his pen making a sound like a mouse gnawing at the baseboard. She waited as he stood and turned to face her.

It had been ten years since she’d last seen Paul Bridger, but she recognized him right away. She immediately felt younger, and a little flushed.

“Paul! What a … pleasant surprise.”

He flicked his eyes toward the opposite wall, as if to signal that they were not alone, or maybe he was just nervous. Just as well either way, because she wasn’t yet sure what sort of greeting to offer. Their last time together had ended in a mix of complicated events and emotions, some of which they had never shared with their superiors. Or she hadn’t, anyway. As for the personal repercussions, even Bridger still had no idea, mostly because he had never asked. Since then, he’d moved up the ranks, and he now managed selected ops across most of Europe. And now here they were, face-to-face in a silent room, alone but probably not alone.

For a moment, neither of them spoke. His eyes shone with eagerness even as he seemed to hold himself in reserve. She wondered who or what might be hiding behind the thermostat, the fire notice, or the closed door. But her earlier annoyance with the idea of becoming part of a team was gone, because now she felt certain her talents would not be wasted. Bridger wasn’t flawless—who was?—but he was known throughout the Agency as a man who knew how to run an op, and who always got the most out of everyone. He could be stingy with information, but that was the nature of their trade. Need to know. Compartmentalize. Tell me, but no one else.

He was also a master of the calculated risk, comfortable out on the crumbling ledge where only the nimble kept their footing and you were never sure when you might have to jump. Not unlike where Claire had been only an hour earlier, although in Bridger’s case it always seemed to count as a plus.

“Shall we get down to business?” he said crisply, gesturing to the nearest chair.

Ten years, and those were the first words out of his mouth. What a careful performer. It was a little disconcerting. Then he smiled warmly and she felt better.

Claire took a seat, certain that life was about to get interesting.

Wow, I cannot wait to read The Cover Wife! This extract has hooked me right in so I’m moving this one up the TBR straight away.

The Cover Wife by Dan Fesperman was published in the UK by Head of Zeus on 6th July 2021 and is available in hardcover, audio and digital formats (please note, the following links are affiliate links which means I receive a small percentage of the purchase price at no extra cost to you): | amazon.co.uk | Waterstones | Foyles | Book Depository | bookshop.org | Goodreads | damppebbles bookshop.org shop | 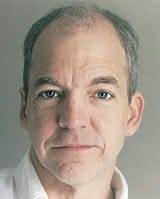 Dan Fesperman’s travels as a writer have taken him to thirty countries and three war zones. Lie in the Dark won the Crime Writers’ Association of Britain’s John Creasey Memorial Dagger Award for best first crime novel, The Small Boat of Great Sorrows won their Ian Fleming Steel Dagger Award for best thriller, and The Prisoner of Guantánamo won the Dashiell Hammett Award from the International Association of Crime Writers. He lives in Baltimore.