“When struggling journalist Cecily Wong is invited to join an expedition to climb one of the world’s tallest mountains, it seems like the chance of a lifetime.

She doesn’t realise how deadly the climb will be.

As their small team starts to climb, things start to go wrong. There’s a theft. Then an accident. Then a mysterious note, pinned to her tent: there’s a murderer on the mountain.

The higher they get, the more dangerous the climb becomes, and the more they need to trust one another.

And that’s when Cecily finds the first body . . .”

Hello and welcome to damppebbles. Today I am delighted to share my review of Breathless by Amy McCulloch. Breathless is published today (that’s Thursday 17th February 2022) and is available in hardcover, audio and digital formats. I chose to read and review a free eARC of Breathless but that has in no way influenced my review.

If you’re a regular visitor to damppebbles then you may be aware that I have a bit of a thing for books set in unpredictable, inhospitable, snow covered environments (normally the Alps or the Himalayas). Where the cold, the altitude or a sudden avalanche could kill you in the blink of an eye. I find the drive mountaineers have to conquer the next peak utterly fascinating. Throw in a murderer and you’ve got a book I HAD to read!

Adventure journalist Cecily Wong is shocked when renowned mountaineer, Charles McVeigh, invites her to join his team as they climb Mt. Manaslu. On summiting Mt. Manaslu McVeigh will achieve the impossible and enter the record books – climbing all 8,000 metre mountains, ‘the Death Zone’ peaks, in twelve months. An elusive interview with the poster-boy of the climbing world has been promised to Cecily as soon as they summit. It’s the kind of opportunity she can’t miss and could resuscitate her failing career. But after months of careful preparation and planning, things immediately start to go wrong and a fellow mountaineer dies before reaching base camp. Cecily and her team are in grave danger. If the mountain doesn’t destroy them, the killer will…

Breathless is a thoroughly enjoyable psychological murder mystery set at high altitude. I loved how in-depth this novel was with lots of fascinating detail about mountaineering and the processes involved. The author’s knowledge absolutely shines through giving the story a level of realism that other novels set in similar environments don’t always have. I really enjoyed how realistic the story felt and I’ve come away from Breathless feeling as though I’ve learnt more about mountaineering than I knew before (not that I claim to know much, of course!). It was also very easy to feel I was there on the mountain with Cecily thanks to McCulloch’s vivid imagery.

I warmed to Cecily over the course of the book. Being a fairly new mountaineer, and one yet to reach the summit of any mountain, she is the least experienced of the group which brings its own challenges. But she’s determined to prove herself. Cecily also harbours a traumatic secret which she will do everything she can to protect. The guilt she carries and the memories she holds just won’t let her be. She’s a fantastic lead protagonist – flawed, inexperienced and on edge. Not the cool, calm, confidence you want 7,000 metres above sea level! The other characters in the book are all well-written and each play their part in the story. I enjoyed the way not everyone in the team got on, the underlying ever present tension was wonderful, with the friction really adding to the unease.

The suspense builds at a great pace getting under the skin of the reader ensuring you keep turning those pages. As the book raced towards its heart-pounding climax I found myself holding my breath (pun intended! 😉), completely absorbed by McCulloch’s writing. And what an ending it is! I had my suspicions as to whodunit which were correct but that didn’t stop me from really enjoying Breathless. The characters, the setting, the complete isolation miles away from help, this book ticked so many boxes for me.

Would I recommend this book? I would, yes. I thoroughly enjoyed Breathless with its compelling story, fascinating look into mountaineering life, interesting characters and stunning setting. The author’s descriptions of mountain life and the processes the climbers need to complete made the story feel authentic without being overly complicated or turning the novel into a convoluted ‘how to’ guide. As I mentioned earlier in this review, I am fascinated by the drive and fearlessness mountaineers possess. Pushing their bodies to the limits in the most inhospitable circumstances, all for that momentary high of reaching the summit. If you’re anything like me with the same fascination, or if you just enjoy a well-written psychological murder mystery, then make sure you add Breathless to your shelf. All in all, a great read set in one of the deadliest places in the world. Recommended.

I chose to read and review a free eARC of Breathless. The above review is my own unbiased opinion.

Breathless by Amy McCulloch was published in the UK by Michael Joseph Books on 17th February 2022 and is available in hardcover, audio and digital formats (please note, the following links are affiliate links which means I receive a small percentage of the purchase price at no extra cost to you): | amazon.co.uk | Waterstones | Foyles | Book Depository | bookshop.org | Goodreads | damppebbles bookshop.org shop | 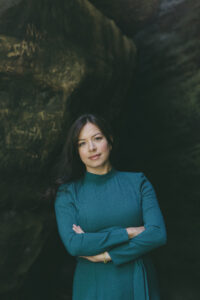 Amy McCulloch is a Chinese-White author, born in the UK, raised in Ottawa, Canada, now based in London, UK. She is the co-author of the #1 YA bestselling novel THE MAGPIE SOCIETY: One for Sorrow, and has written seven solo novels for children and young adults. She has hit the bestseller lists in several countries around the world, and been published in fifteen different languages.

Before becoming a full-time writer, she was editorial director for Penguin Random House Children’s Books. In 2013, she was named one of The Bookseller‘s Rising Stars of publishing.

When not writing, she loves travelling, hiking and mountaineering. In September 2019, she became the youngest Canadian woman to climb Mt Manaslu in Nepal – the world’s eighth highest mountain at 8,163m (26,781ft). Other addictions include coffee, ramen and really great books.